Born in Milano on July 8, 1940, she studied in Torino, and graduated in 1958.
During medical studies at Torino’s Medical University in October 1962, she took part of Anaesthesiology Institute directed by prof. Enrico Ciocatto. From November 1964 she worked as assistant, specialized in Anaesthesia (director prof. Achille Mario Dogliotti). During this period she worked full time in the 5 Operatory theaters of Surgical Department of Ospedale Molinette.
Since May 1969 she directed the Anaesthesia and Resuscitation Service of the University Istitutes of Gynecology and Obstetrics at S. Anna Hospital (10.000 deliveries by year).
From 1970 up to November 2000 she was Director of the Department of Obstetrical Anaesthesia and Resuscitation, where she is now consultant.
She provided anesthesiological safety improvement in the Operatory and Delivery rooms, and promoted the Obstetric Intensive Care Unit, for the Piemonte Region, with 200 patients assisted by year and very good results in term of surviving.
She has given lessons at the schools of specialization in “Anaesthesia and Resuscitation” and “Obstetrics and Gynecology” of Torino University since 1970 (about 100 hours of lectures by year).
She has been called in the directory council of many anesthesiological associations (AAROI, AISD).
Since December 2002 she has been seating in the council of “Ordine dei Medici e degli Odontoiatri di Torino e Provincia”.
Professor Margaria is vice-president of the Directive Board of SIAARTI 2003-2006 and cohordinates the Group of study for Obstetric Analgesia and Anaesthesia.
Since June 2002 she has been chief of the Anaesthesia Service of the Day Surgery Promea in Torino; in the same structure she has taken the role of Direttore Sanitario since March 2003.
She organizes meetings, stages and congress based on assistance and good health of mothers and newborns and the safety of the operatories and delivery rooms.
She published more than 300 scientific works and took part in many books regarding Anaesthesiology and Resuscitation. 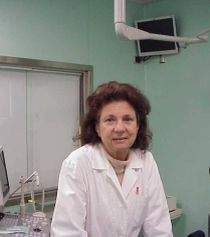